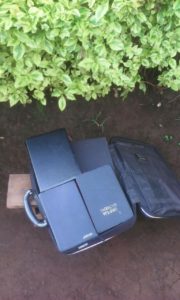 BVIM provided some Bibles and the New Testaments for the local congregations in Kisii Region of Kenya. This was in response to the appeal for help, which came from the leadership of these Churches.
Even though English and Swahili are the two official languages in Kenya, many do not have the Bible in their own local language (Ekegusii).
The cost of procuring the Bible for an average Gusii Christian is high, in comparison to the cost of living for the area. Many people, especially in the rural areas can barely afford it.
At Bible Vision International Ministries we are committed to meeting this spiritual need of the people.
The Bible translation in the local Ekegusii language is too old, for the people to be able to understand scriptures.
The Kenyan Bible Society is still working on a modern Bible translation into the Ekegusii Language. This is a big project if we do take into consideration, the constant changes in the contemporary Kenyan society, which the old bible translation is yet to catch up with.
Please, pray for the theologians and linguists that are involved in this project. There are lots of linguistics, cultural and traditional barriers, that they do have to overcome in getting the new modern translation of the Ekegusii Bible ready for their people.

Meanwhile in fulfillment of our promise to the villages and towns that were evangelized, Bible Vision International Ministries has been able to get Bibles and New Testaments into the hands of these new believers in Christ. To many of them this is their first Bible.
Please, pray that The Lord will use them to change their nation; as they apply the teachings of God’s word into their personal lives. 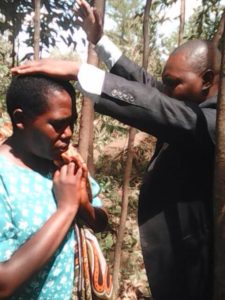 Pastor Oboiko praying during one of the recent crusades

TESTIMONY  OF HEALING FROM KENYA
During the April 2017 Kenyan rural crusade, “P”.. was sick and couldn’t make it for the Church service. On getting back home from the Church service, hardly did the father know that, he would have to put into practice what he had just learnt during our last crusade in Kenya.
His son was spiritually attacked… His lower jaw for no reason at all fell out of position, and was out of position. It dropped down. The boy couldn’t speak and the doctors at the hospital could not explain the situation.
They wanted to put him under anesthesia for an emergency surgery in a second hospital. But P’s… father remembered what he had just heard in Church, during one of our meetings. He laid his hands together with his wife on P…, and just decided to go home with his son instead of having him surgically operated on.
The son slept off and woke up the following morning, completely healed and restored to total health. His jaws came back into place without any pain in any part of his body again.
P… understands that he was under some spiritual attack, but was completely delivered and healed by Jesus. He now travels about with the father, testifying with a passion and strong desire to serve the Jesus who had healed him.