Stop the struggle; and answer the call 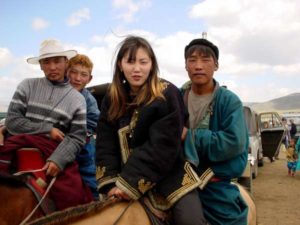 The Mongols waiting for you to come with Jesus

The scriptures says about your call from God:

“Besides, one does not appropriate for himself the honor [of being high priest], but he is called by God and receives it of Him, just as Aaron did. So too Christ (the Messiah) did not exalt Himself to be made a high priest, but was appointed and exalted by Him Who said to Him, You are My Son; today I have begotten You.”
Hebrews 5:4-5 AMPC

To be called of God to do anything is one of the greatest honors, that any human can ever receive from above. Jesus as the scriptures shows to us here, happens to be the only One who was never called; but Who was appointed and exalted by God. Jesus had always been with the Father. He had an established relationship with the Father already, before He was appointed and exalted. His office and ministry on the earth was the highest, that ever had been and forever will be.

No one can appropriate the honor of being called of God to himself. It is too much of a high risk to take. It comes with a higher level of responsibility, than that of just being a believer in Christ. God does not ever take it lightly, and neither should you. And you can’t take it upon yourself, if God never gave it to you in the first place.

Are you under authority?

Yet there are those who have decided to take the pathway, into self destruction on their own volition. By appropriating the honor of being called to themselves, they have opened themselves up for the attacks of Satan. It is not every time when negative things do happens to a Christian, that it necessarily is of the Devil. Many times certain Christians had opened the doors into their lives, for the enemy’s attack by themselves out of ignorance. You need to be very careful with such people, so that you will not have to be a partaker in their sins (1 Timothy 5:22).

In Numbers chapter 16 you can read about the rebellion led by Korah, against Moses and Aaron in the wilderness. He led the children of Israel in rebellion, against God’s constituted authority among them.

“They assembled together against Moses and Aaron, and said to them, “You have gone far enough, for all the congregation are holy, every one of them, and the LORD is among them. Why then do you exalt yourselves above the assembly of the LORD?”
‭‭NUMBERS‬ ‭16:3‬ ‭AMP‬‬

Moses was the authority through whom God spoke always to the Israelites in the wilderness; but Korah and the other 250 leaders rebelled against him. The Lord responded without delay in dealing with the rebellion. Korah and all the 250 men with their families died instantly in this rebellion. The ground swallowed them up alive.

Yes, the people of God are Holy; but there are those who had been called and anointed by God, into different offices within the body of Christ. Respect them, honor them and learn to conduct yourself with reverence towards them all. You do have the anointing into the call of God, just like them also. If we don’t learn to honor one another, the enemy will use that opening to tear you apart.

In another situation God dealt with Miriam for rebelling against Moses:

“And He said, “Hear now My words: If there is a prophet among you, I the LORD will make Myself known to him in a vision And I will speak to him in a dream. “But it is not so with My servant Moses; He is entrusted and faithful in all My house. “With him I speak mouth to mouth [directly], Clearly and openly and not in riddles; And he beholds the form of the LORD. Why then were you not afraid to speak against My servant Moses?”
‭‭NUMBERS‬ ‭12:6-8‬ ‭AMP‬‬

Moses was the authority of God for the people in the wilderness, while Miriam was a worship leader and Aaron was the Priest. If God wanted to say anything to them, He spoke through the authority that has been designated by Him among His people. They are to be referred.

You can’t minister effectively before the Lord if you are not doing it under authority. God sees through a rebellious heart. He despises it and He will always deal with it. Get rid of the rebellion. Repent before the Lord. Submit to the authority that God has set over your life. And if you don’t have any, go and look for someone to submit to in your calling and ministry. You can’t be blessed by God without it. That’s the point from where He is going to start lifting you up.

There are so many single mothers today who are raising up dysfunctional children, because they can’t just submit to any man in authority at home. The Devil is using that against them, as their children are either getting into one trouble or another. Their children are being raised without the constituted authority, that God ordained in the home. They are deeply suffering, because of their rebellious attitude towards constituted authority at home. And the children are even suffering more. The body of Christ can’t afford to be dysfunctional like these people of the world. That type of mentality is not for anyone born of God.

“Remind people to be subject to rulers and authorities, to be obedient, to be ready and willing to do good, to slander or abuse no one, to be kind and conciliatory and gentle, showing unqualified consideration and courtesy toward everyone.”
TITUS 3:1-2 AMP

There are certain things in the Kingdom of God, that no one can ever arrogate upon himself. One of such things is the call of God. The call of God over your life demands that, you be found faithful in everything that you do. You may have been able to initiate the call itself; but you can never dictate to God, what you want to do with that calling. That’s a prerogative that belongs to God alone.

This is one of the reasons why He is called the Almighty. He alone can determine the call, and the course of that call for you. He determines what He wants you to do with the call and not you. Why? Because He alone knows every plan, that the enemy has to stop you, from fulfilling that call. And He knows how best you can thwart that plan of the enemy.

It is a good thing for anyone to desire serving the Lord; but no one can ever tell God how he or she will serve. When He calls you, you’re just to answer to His call. The relationship that you are developing with Him right now, depends on your response to that call over your life.

When Jesus called Peter and his brother, they never had the opportunity to consider if they would obey His voice.

“As he was walking along the Sea of Galilee, he saw two brothers, Simon (called Peter) and Andrew. They were throwing a net into the sea because they were fishermen. Jesus said to them, “Come, follow me! I will teach you how to catch people instead of fish.” They immediately left their nets and followed him.”
Matthew 4:18-20 GW

Immediately they left their prospering fishing business, their wives and children to follow Jesus. That was a big sacrifice. To answer the call of God, you must be prepared to pay a big price. You can’t really follow Him, if you are not ready to make sacrifices for Him; because He is going to ask you to let, the most precious things in your life go away. He will do this because your ability to follow Him, demands a hundred percent loyalty to Him on your part, and not to the things which may be precious to you.

As mentioned last week, God will test your faithfulness to Him in everything that you are doing. Remember that Jesus once said:

It will cost you everything to answer to God’s call. That’s one of the reasons why some people don’t want to answer His call; because they are not ready to forsake everything in following Him. But it is at the end of all the sacrifices that you can make for Him, that He will start picking you up to bless you. On the other hand if you keep on struggling to obey Him, then things will get tougher for you.

If you allow the Holy Spirit to lead and guide you, into the will of God (Romans 8:14) as you obey His call, then you will find peace with God. Your relationship with the Holy Spirit is important, in guaranteeing your ability to stand in the will of God. That is not all, because God’s provision will also be readily made available for you, to do what He has called you to do (Mark 10:28-31).

You are made of gold, not of bamboo trees

Certain people do like to do God’s will, by fulfilling His call in the way of the world. This often lands them in troubles, and then they will often wonder why things are not working right for them.

The scriptures says it clearly that:

“The world and everything in it that people desire is passing away; but those who do the will of God live for ever.”
1 John 2:17 GNB

Those who are fulfilling the will of God with the desires of the world, can’t last long in doing it. It’s like someone who is constructing a skyscraper building with the bamboo trees. The building can’t stand for long with such materials, as pillars for the building. In the same manner you can’t build a spiritual house for God with earthly materials. Such things don’t get along together. No, you build a spiritual house for God only in the spirit (John 4:24); because God is a Spirit and He can only live in a spiritual house not in an earthly one:

“Now in a large house there are not only vessels and objects of gold and silver, but also vessels and objects of wood and of earthenware, and some are for honorable (noble, good) use and some for dishonorable (ignoble, common). Therefore, if anyone cleanses himself from these things [which are dishonorable–disobedient, sinful], he will be a vessel for honor, sanctified [set apart for a special purpose and], useful to the Master, prepared for every good work.”
2 TIMOTHY 2:20-21 AMP

When will you start learning to yield to the voice of the Holy Spirit, to lead and guide you into obeying God? For as long as you’re going to keep resisting the will of God for your life, your struggles will continue. Crucify the flesh in you, so that your spirit may become alive to the will of God. Start doing it now:

“And those who are Christ’s have crucified the flesh with its passions and desires. If we live in the Spirit, let us also walk in the Spirit. Let us not become conceited, provoking one another, envying one another.”
Galatians 5:24-26 NKJV