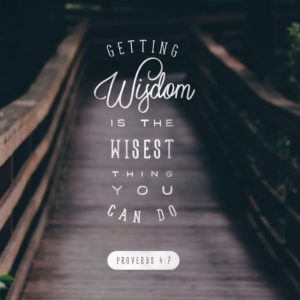 “Getting wisdom is the wisest thing you can do! And whatever else you do, develop good judgment.”
Proverbs 4:7 NLT

King Solomon once referred to the activities of the ants, the conies, the locusts and the lizard; as being the “exceedingly wise” things (Proverbs 30:24-28). These creatures do not have the ability to have faith for anything. Yet they were able to do the “exceedingly wise” things. But as Jesus later revealed to us, God is actually the One who cares for them always (Matthew 6:25-34). God’s omnipotency and power is able to care for everything and everyone, that are created by Him.

The scriptures talks also about Adam, who was given dominion and authority over all of God’s creations. And that includes the creatures which were referred to by Solomon. It says:

“God blessed them and said to them, “Be fruitful and increase in number; fill the earth and subdue it. Rule over the fish in the sea and the birds in the sky and over every living creature that moves on the ground.” Then God said, “I give you every seed-bearing plant on the face of the whole earth and every tree that has fruit with seed in it. They will be yours for food. And to all the beasts of the earth and all the birds in the sky and all the creatures that move along the ground—everything that has the breath of life in it—I give every green plant for food.” And it was so.”
Genesis 1:28-30 NIV

Adam and Eve were given unlimited power over all of God’s creations; including power also over the serpent, who later deceived them into sinning against God. Created mankind was given dominion and authority over every other created things by the Almighty Creator.

God brought all the animals that were created to Adam, “to see what he would name them”. God was the One who created all of these creatures. He could have easily given names to each one of them. But He decided to give that privilege in creation to Adam, because of the dominion that had already been given to him over them.  Secondly, God had given Adam the right to administer authority over all of these creatures, and by giving them names Adam was exercising that authority. This right made Adam a co-partner with God on earth, in continuing the work of creation.

Adam was also given the task of working, in taking care of the garden of Eden and everything inside it. Adam’s rule and dominion over all of the earth, was conditional on his ability to work in taking care of the garden. He was meant to use his faith in doing this. There was no need for him to toil; but faith was given to Adam by God, to use in dominating and ruling the earth.
He was created in the image and likeness of God. So when God brought each animal to him, God knew that Adam had the ability to identify each one of these animals, in the very way as God knew them when He created them. Adam understood the purpose of God in this, for each creature by his spirit man. He saw each one of these creatures in the same manner as God saw them.

If Adam spoke faith-filled words, you can do much more..

This ability to think like God empowered Adam with faith-filled words, which he spoke out of his mouth in calling each one of the creatures by name. By faith Adam spoke words and called each one of them in becoming what God created them to be. Adam became a co-partner with God in creation. Before speaking faith-filled words in naming each creature, he believed with his heart that each image of the creatures, that he saw was exactly what God created them to be. And the scripture says: “whatever the man called each living creature, that was its name”.
Faith-filled words as spoken by Adam released the power of God in him, in naming the animals just as he saw them with his heart. Adam became a co-partner with God in creation. This was one of the best moments for Adam as he began to enjoy unhindered fellowship with God. An eternal intimate relationship between God and man began, from the moment Adam began to speak faith-filled words, in giving names to each of the creatures. A created man was actually acting on behalf of God on the earth. This was the very purpose for which we were all created by God: to physically act in God’s place on earth, so as to continue His works of creation.
That work began when Adam began working, to care for all the creatures in the garden, as he called them by names. Whatever you believe with your heart, and confess with your mouth has the power to manifest what you believe. When you do this you are continuing the work of faith, that was started by Adam in naming the creatures which God showed him.

Learn to vocalize the thoughts and ideas from God in you…

We as human beings who had been created in the image of God, do have the ability to believe all the thoughts and ideas from God with our hearts. But until words of faith are released through the mouth, we can’t have what our heart is believing. Faith-filled words that are released from the mouth, does has the power to physically manifest those thoughts and ideas from God. Adam in naming each animal had received the thoughts of God, which helped him in giving names to the creatures. Everyday thousands of thoughts and ideas crosses your mind. Which one of them are you doing something about right now? You can’t say that God is not speaking to you! You will be calling Him a liar if you do! He speaks all the time through those righteous thoughts and ideas that crosses your mind daily.
And oftentimes because your mind has not yet been renewed, to be strong in those thoughts and ideas; you will often tend to say that you are not hearing Him. Those righteous thoughts and ideas are the wisdom from God to you. Stop ignoring them. Begin today by paying particular attention to them (Proverbs 4). If Adam never ignored them, you have no right to be ignoring them. And better still your wisdom is not like that of the fallen Adam. Your wisdom is righteous because you have the mind of Christ.
King Solomon studied the ways of life for each creature, that he wrote about by the Spirit of wisdom in him, which he had received from God. The wisdom in the fallen Adam on the other hand was a polluted and earthly one. It was the wisdom to know good and evil, which he received while disobeying God (Genesis 3:6&7). But King Solomon had what fallen Adam never had. Solomon got wiser in his walk with God as he observed these creatures. But something greater than the wisdom of Solomon is in you – God’s Holy Spirit.
Adam only had the knowledge to work in taking care of all that God created. If only he had continued with this, instead of choosing to disobey God, he would had received the wisdom that was much more glorious than Solomon’s.
God had created all of the creatures by calling them into existence with faith-filled words. In naming the creatures Adam was able to use his faith also, in creating things by doing exactly what he saw God did at creation. Adam learnt first hand from God about how to use his faith, by calling those things that were non existent to come into existence. Jesus said also:

“Jesus gave them this answer: “Very truly I tell you, the Son can do nothing by himself; he can do only what he sees his Father doing, because whatever the Father does the Son also does. For the Father loves the Son and shows him all he does. Yes, and he will show him even greater works than these, so that you will be amazed“.

The Bible says “whatever the man called each living creature; that was its name“. Adam named them all by faith, and there was nothing that Adam never had the knowledge for at creation. God’s power and ability was in Adam before his fall into sin. He learnt to speak words, as he heard God speaking. He saw how his words manifested what he had said in giving names to the creatures. This is what Jesus is still doing up till today in glorifying the Father. Jesus did what Adam also did at creation.
Eve was created to help him with the task of creating things. Nothing that they both did together was ever impossible for them. But at the very moment of temptation by the serpent, they both failed to stop the tempter, and lost everything.
All that Adam should have done, was to have said words; just as God taught him to say faith-filled words in naming the animals. He would had stopped the woman from falling into the temptation, by just saying words in rebuking the serpent. But he restrained himself from doing it; just as many Christians today do often restrain themselves from speaking faith-filled words. Adam’s spoken word would had instantly condemned the serpent. Adam was the one who gave a name to the serpent. He had the authority in him to stop the serpent, but he did not use it.
We need to observe here that God did not even intervene, as Adam was being tempted, because everything that Adam needed to defeat the serpent, he had received from God. Adam never used the power or authority in him in stopping the serpent.
Some Christians are in the same situation today like Adam. The enemy is advancing forcefully against them, in taking from their lives, what rightly belongs to them as God’s children. The failure to act against the wiles or strategies of the devil, by speaking faith-filled words against those strategies, has destroyed the foundation of faith in these followers of Christ today. We need to always speak faith-filled words against the wiles and plans of the devil in destroying them. We can’t claim ignorance of them, because God always reveals them to us, through those thoughts which often crosses our mind.
Paul told us to:

“To keep Satan from getting the advantage over us; for we are not ignorant of his wiles and intentions.”
2 Corinthians 2:11 AMPC

You can’t be ignorant for ever, concerning all the satanic works around you. You can’t deny the works of Satan around you – the debts, sicknesses, evil works in your communities and much more. His works are all everywhere. So if your enemy is always working to destroy lives and things around you; remember that you were created by God to be creating things in stopping him. It is time to rise up, and start casting down all the works of Satan with your own words, which you believe with your heart. Adam chose to be ignorant, even though he had all of God’s ability in him. He lost the very best of God into his life. You can’t afford to make the same mistakes like him. You have someone bigger and stronger living inside you. Yes, you can speak faith-filled words in changing your world. Till next week.